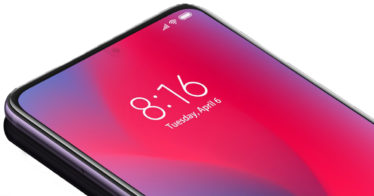 On June 3rd, Chinese manufacture Oppo released a video showcasing their upcoming mobile with under display selfie camera technology. It is basically a camera placed under an OLED display. Which doesn’t take up space like notch while using the phone. Several hours later, Xiaomi also released a video with same technology on their upcoming smartphone. However these smartphones are still a concept, and we can expect a real one in our hand soon.

A tweet from Oppos official twitter page on 3, June 19 has confirmed that, Oppo is working on its under display camera to over come camera notches and to offer its user a full screen displa. Oppo already has a full view display in F 11 pro and Find X, but those phone has a pop up cameras. This new concept phone from Oppo will replace the old notch and pop up cameras. The new notch-less and non motorized under display concept has mad an expectation among the smartphone users.

For those seeking the perfect, notchless smartphone screen experience – prepare to be amazed. 📲

You are taking a very first look at our under-display selfie camera technology. RT! 🤯 pic.twitter.com/FrqB6RiJaY

A short teaser video from xioami made everyone wondering about a new technology. Because in that video Xiaomi showed up with its concept smartphone in reality. In that video Xiaomi concept device is compared with Xiaomi Mi 9. Howerver the under display camer of Xiaomi concept phone is still visible, when the device is powered of, but fills with display once the device is powered on. A recent twitter post from Wang Xiang (Xiaomi Senior VP) has  some slides explaining the under display camera technology, which confirms that soon the commercial selfie camera is going to be replaced with under display cameras.

Do you want a sneak peek at the future? Here you go…introducing you to Under-Display Camera technology!#Xiaomi #InnovationForEveryone pic.twitter.com/d2HL6FHkh1

Xiaomi’s Under-Display Camera Technology could be the ultimate solution for a Full Screen Display coexisting with a front camera! RT if you love it. #InnovationForEveryone pic.twitter.com/8e7EdEBn8J

SO, WHAT’S THE DIFFERENCE BETWEEN THESE 2 PHONES?

While, these 2 phones uses the same under display selfie camera technology. The oppo smartphone turns off the pixels around the selfie camera while tacking pictures. So the camera is shown as a notch. But in Xioami smartphone, the entire pixels on top area of the display is turned off. So no one will notice the camera taking pictures behind the screen.

WHY ALL COMPANIES ARE OBSESSED WITH THIS TECHNOLOGY?

Slowly, the mobile manufacturers are moving away from traditional huge bezel display to notch from essential phone to recently trending pop up camera to punch hole camera in display. It seems like more companies like Samsung and other mobile manufacturers are also working on this technology to achieve a bezel-less display. And don’t forget that Samsung has already portrayed a demo display last year. They are trying to place all their sensors under the display, which is expected to release at the end of 2020.

WHY IT’S A HUGE DEAL?

To put in simple words, the camera is placed under the OLED display. Which doesn’t interfere like notch, while using the phone like playing games or watching videos. The pixels around the camera is turned off, which results in light passing through the display to camera. Which helps the camera to take pictures. Keep in mind that the picture taken from these phones might not be as good as compared to other phones in the market. Because the camera has to see through the pixels of the screen unlike the glass like other phones. This can be avoided by introducing new algorithms to the camera app. Which can result in better quality images.

Already, google have achieved this on their Pixel phone for years and no other company can beat their camera quality even though they have only one camera. Anything can happen in future, lets hope one day, every device will be bezel-less.