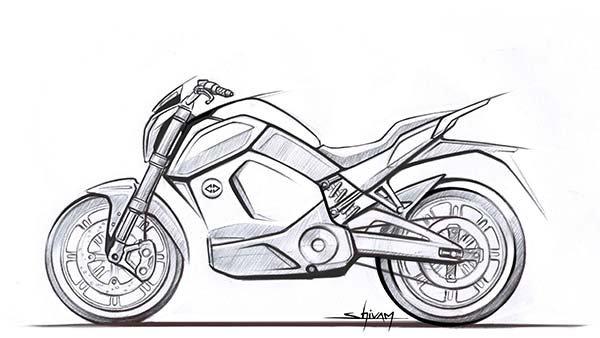 Revolt Motors to launch Revolt Electric Bike, India’s first electric motorcycle with Artificial Intelligence on 18 June, 2019. Indian startup Revolt Intellicorp, founded by Micromax CEO Rahul Sharma is all set to launch the first electric motorcycle with  Artificial Intelligence in the country today. Revolt has been planed three products for India and this is the first among them.

The Electric Bike from Revolt also has LTE connections to run a 4G SIM and it also got Over The Air (OTA) updates. The Electric Bike is based on AI, which improves the battery performance by optimizing the riding style of the rider with the help of AI. The top speed of this bike is claimed to be at 85kmph.

The all new electric bike from Revolt Intellicorp also features custom exhaust sound to choose from. The bike got speakers to produce similar sounds like commercial ICE vehicles. The revolt e-bike is connected to the riders smartphone through 4G connectivity. With the help of a smartphone app the rider can choose their prefared exhaust sound.

Other specifications of the electric bike has not yet reveled by the Revolt Intellicorp. There is no time to wait to know the detailed specification of this cool bike, because its yet to be released by today.

The bike is said to be launched in Delhi first followed by other metro cities. The bike is expected to be priced somewhere between 1lakh on road price.

The design sketch of the bike reveals that the upcoming bike will be a naked one with a single piece seat, upright handlebar and angular tank design. The sporty look of the bike is eye catchy. The bike got LED headlight, tail light and indicators.

From the design, the bike got inverted fork suspension on front and rear monoshock suspension with a stylish swing arm. The ebike got disk brakes on both of its front as well as on the back wheel.

The motor of the e-bike is positioned at the center of the bike, which gives the bike a lower center of gravity. The bike got alloy wheels fitted on both of its end which adds cool look to the bike.