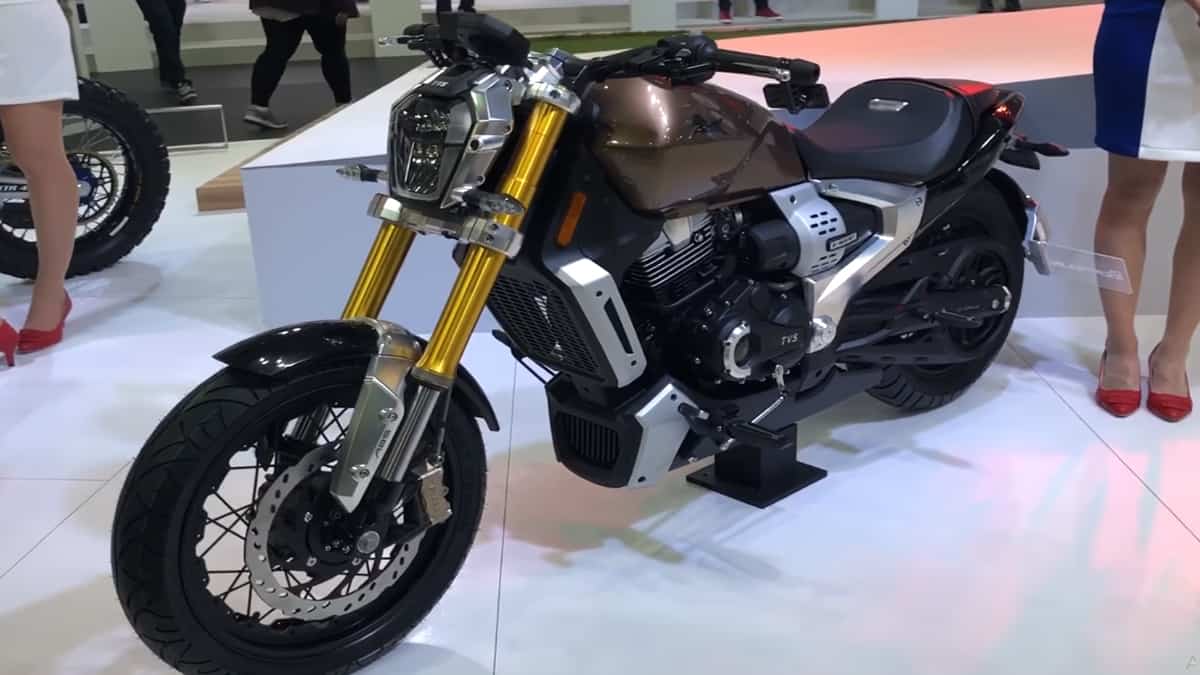 The TVS Zeppelin is a performance based concept cruiser motorcycle, which was unveiled during last year at Auto expo took place in Delhi. Generally TVS has the habit of bringing the concept motorcycles into reality. So, we can soon expect the productive version of the bike in Indian markets. TVS calls Zeppelin as the first hybrid motorcycle in India. The vehicle packs some of the segments in which first features looks promising and it will certainly excite the buyers in India.

TVS is much known for presenting the modern and futuristic design to their line-up and had done an excellent job in terms of design. For the first time, they opted for the cruiser design format and fortunately they nailed the design. The tank looks bold and muscular like the typical cruiser motorcycle. The foot pegs are front set and the handlebar is lowered which gives an aggressive riding posture. The headlight looks sporty and appealing although it reminds us the Ducati diavel. The bigger 17 inch rim at the front and smaller 15 inch rim at the rear completes the look of the cruiser motorcycle. The seat looks wide and comfier, so the long distance tourers will enjoy their ride and also there is not much complaint on the pillion seat as well.

Zeppelin packed with a 220cc single cylinder liquid cooled engine which produces 20 BHP of maximum power and 18.5 Nm of peak torque. The engine of the Zeppelin is mated to a 5 speed gearbox and for the first time TVS introduce belt drive for their power cruiser.

The bike is fitted with a high performing 1200W regenerative assisting motor with a 48v Li-ion battery. It enhances overall performance of the vehicle and offers 20% more torque when needed. In addition to this Zeppelin is also equipped with TVS patented Integrated Starter Generator (ISG). Which acts as a booster to start quickly and TVS claims that it will improve overall performance and fuel efficiency

The braking duties of the Zeppelin are handled by petal discs at front as well as the rear. We can expect TVS will give Pirelli tire as an option which gives extra grip to the road. The bike is also equipped with 41mm gold plated USD forks for better handling and riding dynamics. The safety department is handled by dual channel ABS and it will be given as standard.

TVS Zeppelin gets the segment first smart bio-key, all LED lighting, gold plated USD forks, electronic speedometer and an HD action camera which excites all the motorcycle vloggers for recording all their adventure moves.

The TVS Zeppelin is certainly a good looking motorcycle although some elements which shown in the concept bike may not come in the final production vehicle. Normally TVS takes two years to bring the production version of the bike so we can expect the bike will hit the roads in 2020. As for the pricing goes TVS has not specified any prices but we can expect TVS will price aggressively in between 1.20 to 1.40 which makes it the perfect spot as there will be no other competition in this power cruiser segment.